The WordPress.com stats helper monkeys prepared a 2013 annual report for this blog.

The concert hall at the Sydney Opera House holds 2,700 people. This blog was viewed about 12,000 times in 2013. If it were a concert at Sydney Opera House, it would take about 4 sold-out performances for that many people to see it.

The busiest day of the year was June 17th with 338views. The most popular post that day was World War Z’s Creepy In-Game Transmedia Campaign . 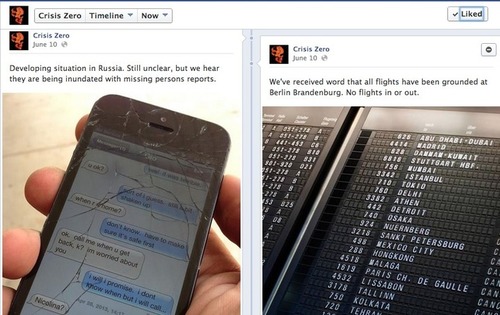 Having thoroughly enjoyed Max Brook’s Zombie thriller novel, I’ve been wondering where the pre-launch transmedia campaign for World War Z is and last night I finally had some spare time to track it…

I finally had a bit of time for some blogging!

Having thoroughly enjoyed Max Brook’s Zombie thriller novel, I’ve been wondering where the pre-launch transmedia campaign for World War Z is and last night I finally had some spare time to track it down.

Cleverly named to stay in-game by hyping a growing crisis rather than the film’s end-of-days all-out War, the Crisis Zero website has a warning video, an alarming set of survival tips, links to a Twitter account posting intermittent updates since May 13, and a Facebook Alert Recruitment Tool to spread the ‘viral’ campaign.

And if you follow the links in the Tweets you’ll find the CrisisZero2013 videos on YouTube. Judging by the number of views, which are comparatively small, the audience for these teaser videos hasn’t metastasized to its full viral potential (& yes, all the metaphorical uses of ‘viral’ seem totally appropriate here!).

These teaser videos play deliciously with the premise of an unidentified growing, global infection by giving us snippet videos that hint at attacks or increased airport securitization & travel disruptions. This one below is a genius riff on the popularity of dashboard video cameras in Russia.

Props to the transmedia designers for creating multi-lingual videos both from the ‘Official’ CrisisZero headquarters broadcasting to an affected/infected global audience and for the videos shared by alarmed citizens from around the world (India, Germany, Spain, Denmark, New Zealand). That a number are without subtitles for the English-speaking audience or have subtitles in other languages (French, Spanish) adds to the veracity of what are often the last messages these individuals will send.

Meanwhile, the Facebook updates are tracking the growing scale of the airport shutdowns so with 4 days to go, I’ll be watching to see how the tipping point into global chaos of a zombie apocalypse is staged in this clever campaign.