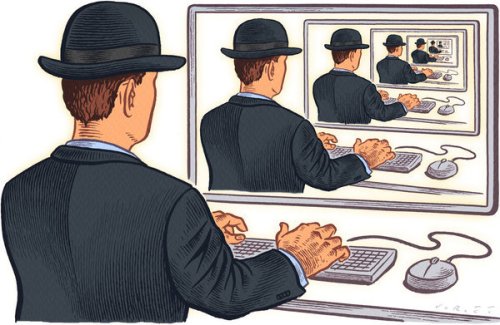 “ON the Web, we often see what we like, and like what we see. Whether we know it or not, the Internet creates personalized e-comfort zones for each one of us.

Give a thumbs up to a movie on Netflix or a thumbs down to a song on Pandora, de-friend a bore on Facebook or search for just about anything on Google: all of these actions feed into algorithms that then try to predict what we want or don’t want online.

And what’s wrong with that?

Plenty, according to Eli Pariser, the author of “The Filter Bubble: What the Internet Is Hiding From You.” Personalization on the Web, he says, is becoming so pervasive that we may not even know what we’re missing: the views and voices that challenge our own thinking.

“People love the idea of having their feelings affirmed,” Mr. Pariser told me earlier this month. “If you can provide that warm, comfortable sense without tipping your hand that your algorithm is pandering to people, then all the better.”

Mr. Pariser, the board president of the progressive advocacy group MoveOn.org, recounted a recent experience he had on Facebook. He went out of his way to “friend” people with conservative politics. When he didn’t click on their updates as often as those of his like-minded contacts, he says, the system dropped the outliers from his news feed.

Personalization, he argues, channels people into feedback loops, or “filter bubbles,” of their own predilections.

Thanks for checking out our project! We call it Dot.

It’s a stylish, durable and downright pocketable 360º (panoramic) lens attachment and app for the iPhone 4.

What does it do?

Dot lets your iPhone capture immersive, fully navigable, panoramic video in real-time – and share with friends on your phone, as well as on Facebook and Twitter, or streamed online using our awesome panoramic video web platform and player.

We’re excited too. Why? Because we’re uber lazy, and we’d rather put down the camera and enjoy the party. We’re making a bet you will too. (Not that we think you’re lazy…)

But seriously, our secret beta testers have already had a lot of fun taking it to concerts, the park, on moped rides in Italy, and showing cramped apartments to mothers halfway around the world.

So? Well, up until recently it took major moolah and hefty gear to make a decent panoramic video. Now all you need is your phone and the world around you.

We haven’t slept much.

We’ve spent the past few months researching, designing, prototyping and coding. This means we have working hardware and software prototypes. Now we need your help to finish the 2nd phase of engineering around the lens and begin tooling for volume production.

We’re excited to bring our cutting-edge (read: magical) panoramic technology to a much wider audience – and even more excited to see what you guys will do with it.

Thanks for your support.

“Success via strangers, or what Transylvania has to do with an 8-bit tribute to Miles Davis.

One of the most exciting things about the social web is its tendency to democratize the creative industry, allowing creators — artists, musicians, publishers, filmmakers, writers, entrepreneurs — to bypass the traditional industry distribution model and self-publish their creative output by crowdfunding it through platforms that connect them with their audience. Today, we look at three brilliant platforms for funding creative projects, plus a few more options specific to narrower creative fields.

Thanks to Nina Simoes!

“SRCH by Starbucks is off and running. Did you finish the first round in time to win a prize? Did you get stumped and find yourself wondering what to do next? For those who want to see how it all went down, you’ve come to the right place.

The game started with a scan of the QR code in Starbucks stores or online. That directed you to the game site where the first clue was unlocked – a video of Lady Gaga quoting lyrics from her song “Born This Way.”….”

“In my last post, I focused on how storytelling impacts business by enlisting people as participants in stories they care about so they buy the products required to fullfill a human need.

But questions remain as to how brands can build narratives that tap into pre-existing stories and communities.

For Coca-Cola, this has become quite an exploration. While seizing market share is an ongoing battle with rival brand Pepsi, tapping into consumer advocacy and niche communities has become an equally important brand goal – a goal that was achieved almost by accident, with results that not only boosted sales but presented a host of new media opportunities.

In 2007, Coca-Cola ran a series of commercials for a campaign called Open Happiness; the spots were beautifully conceived, animated brushstrokes of colour and imagination, depicting a storyworld centred around the idea that happiness is what we create for ourselves in our everyday lives.

They featured Coke as more than a product or brand, but as a support base for individual explorations around the meaning of happiness. There was no harsh product placement or forced messaging. The commercials tested remarkably well.

Coke knew that there was a bigger narrative to explore here, so it decided to expand the commercials into different narrative pieces leveraging established music and artist communities. What became the Happiness Factory created a groundswell of interest around the “metastory” of happiness that culminated in a variety of media types that were adopted, shaped and shared as new stories. This involved everything from mobile applications, to games, blogs and video extensions.

Eventually those pieces blew out even further. Open Happiness kickstarted a world tour of Coke bloggers and laid the foundation for platforms like Coca-Cola Conversations, in which brand stewards curate interesting and fun social artifacts such as Eric Clapton signature guitars, secret soda formulas, subway murals, circus caravans, old inventory lists and a host of cool memorabilia that have been generated or supported by the brand over the years.

As for the measurable success of the Open Happiness campaign to date, we know this:

– There are more than 25 million likes on Coca-Cola’s Facebook page, which is centered around Open Happiness (by contrast, Pepsi has less than 4 million likes).
– Coca-Cola’s worldwide sales have spiked since Open Happiness began.
– Open Happiness has become the new global platform for all integrated marketing for the brand.
– Earlier this year, Coke was awarded the “Best in Show” Addy award for the campaign….”